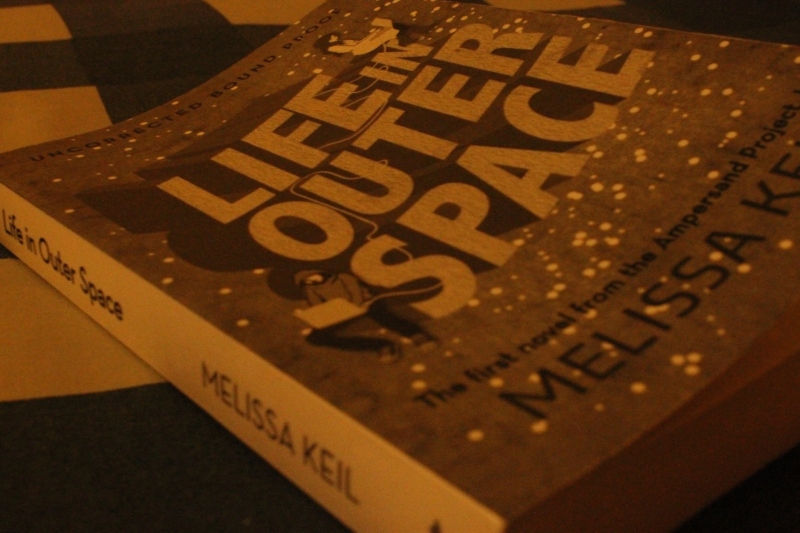 Not a long time ago, I received a very enthusiastic e-mail from Diane of Oops! I Read A Book Again and Pinoy Book Tours about their plans to have a book tour. I don’t normally join book tours and I’m not entirely a fan of some Young Adult titles, but when I read the synopsis on Goodreads, I found it interesting, and the book cover is really cool and beautiful so I signed up for the tour.

Sam Kinnison is a geek, and he’s totally fine with that. He has his horror movies, his nerdy friends, World of Warcraft – and until Princess Leia turns up in his bedroom, he doesn’t have to worry about girls.

Then Sam meets Camilla. She’s beautiful, friendly and completely irrelevant to his life. Sam is determined to ignore her, except that Camilla has a life of her own – and she’s decided that he’s going to be part of it.

Sam believes that everything he needs to know he can learn from the movies … but now it looks like he’s been watching the wrong ones. (from Goodreads.com)

Life in Outer Space is narrated in first person POV and by this guy named Sam Kinnison. He’s well known in Bowen Lakes Secondary as a member of the loser’s club along with Mike, Allison, and Adrian. He spends his time fantasizing his life at school to be taken over by some aliens and abduct them or Leatherface from Texas Chain Massacre taking a surprise appearance on their school corridor whenever Justin Zigoni starts to get his asshole mode on. Sorry to burst your bubble but none of them shows up to stop Justin Zigoni and Sam landed on his arse. As always, nothing’s new. He’s a geek and he’s totally fine with it as long as he can do what he likes to do—writing screenplays, his horror movies, hanging out with his nerdy-geeky friends, and World of Warcraft. Sam is the kind of person who doesn’t like change in the equilibrium; he’s, like, succumbing to flow of social life and just going with it; taking whatever life gives, even it is sucks, like he’s meant to bear that until he graduates school.

Aliens or Leatherface may not show up but someone did. She swept off every students (and teachers)’s feet with her smile and her charm. She has this enthusiastic and friendly way that smitten people—not including Sam. Camilla Carter may be some awesome girl with a famous father and a British accent who landed in a mediocre school but Sam is not interested. Just like I said above, Sam doesn’t like anything that disturbs the equilibrium of his life so he ignores Camilla but his resistance is rendered futile and she became part of his life and his friends as well.

Life in Outer Space by Melissa Keil is an enjoyable book to read. Actually, this book is same with almost all YA books because of its cliché plot that is: set in school with a formula of Geek Guy + Loser Friends + Awesome Kick-Ass Girl + School Bullies = YA story. It works most of the time but what LiOS makes it different? Well, it’s funny and has this positive, feel-good vibes on that hooked me into reading it. Though it is peppered with so many pop culture reference, I still read it with enthusiasm. I just wish Keil toned it down so it don’t pass for something trying-hard or pretentious with all those references (but who am I to complain? Melissa Keil is a true-blue geek and I know geeks don’t stop talking whenever they start. Also, watch out if their eyes perk up whenever someone mentions their favorite music, film, or book). Anyway, what I like about this book are the characters. They may all be part of the formula but they have other personalities that stand out from the others. They are the strong points of the story. Meet Sam Kinnison, he’s a computer geek and a movie nerd. Aside from that, he whines a lot and he annoys the hell out of me with all those I-just-want-to-get-the-hell-out-of-here thoughts and his horror movie reference almost every scene, but I get him. It is part of his personality and a sort-of defense mechanism against all the bullies he has to face every single day. On the other hand, he’s a really good loyal friend. He also has quirky and hilarious thoughts about almost every thing, especially when it comes to bullies. Another remarkable character is Camilla Carter, she is beautiful and everything insert-positive-adjective-here that teenagers want to be and the girl guys are dreaming to date. She’s very well liked by people in the book because she knows a lot about pop culture and music (because her dad’s a music journalist), and she knows her way to make friends (always a fresh meat). She may be perceived as a perfect girl with perfect life, she is not. She’s lonely most of the times because people go as easy as they come in her life and she longs to belong in place that she can consider as home, but she doesn’t show it and like Sam, she just accept life as it is. My favorite character among them is Mike/Michael. Well, he is a very timid guy and he is GAY. I always find gay characters in books really fun and interesting but Mike is kind of different (are gays different in Australia?). He always have this blank face on and he’s very quiet, far from the usual cheery and funny gays in real life. Also, he has hard-packed abs. I always look forward to read a scene with him on it :P

I love it more because it talks about friendships more than about love or romance. It shows that characters values their friendship and hope the readers will appreciate it the same way. Anyway, I recommend it all of the young readers there and have your dose of geekiness!

Melissa Keil was born and raised in Melbourne, Australia, and has been a giant book nerd for as long as she can remember. She studied Cinema and Anthropology at uni, and spent a few more years studiously avoiding getting a real job by dabbling in a bunch of graduate stuff, including Professional Writing and Editing. In between she had been a high school teacher, Middle-Eastern tour guide, waitress, community theatre dogs-body, and IT help-desk person. Now, by day, she is a children’s book editor, and she spends most of the rest of her time reading, writing, and watching YouTube. Life in Outer Space is her debut YA novel, published by the good folks at Hardie Grant Egmont. It’s a young adult romantic comedy that combines some of her many loves – movies, music, karate, the Astor Theatre, Star Wars, and all things geek. She is currently working on her second novel. Website / Twitter /  Facebook

The giveaway is open to all Philippine Residents. Please follow all the necessary things there by clicking the link (as the code doesn’t work here) to win a proof copy of Life in Outer Space by Melissa Keil. This giveaway is open until April 22, 12mn. May the odds be ever in your favor!

Older: Required Reading 2013: Heat of April
Newer: I AM A HAPPY DORK