“Maybe this was how you stayed sane in wartime: a handful of noble deeds amid the chaos. ” ― Scott Westerfeld, Leviathan

I learned about Scott Westerfeld when I was in High School. During that time, he released his series, Uglies, and I got myself a copy of Pretties. I didn’t know that it was the second book and I was fairly new about the existence of serial books. So I read it and I didn’t actually understand what’s going on in the story BUT I did enjoyed the dystopian/sci-fi world he created. Actually, when I read about The Hunger Games’ Capitol, it reminded me of the city—I forgot the name—from the Pretties where all people are surgically altered for aesthetic purposes (diamonds in the eyes, colored skin, etc).

Anyway, he released again a new series called Leviathan, and I got myself a copy of the first book. I find it interesting because of the gears and metal in the cover. Also, there are also illustrations in the book! By Keith Thompson! What a visual treat! I actually drooled over my copy because the illustrations are so detailed, beautiful, and amazing. I kinda wish that I know how to draw things aside from the matchstick men. 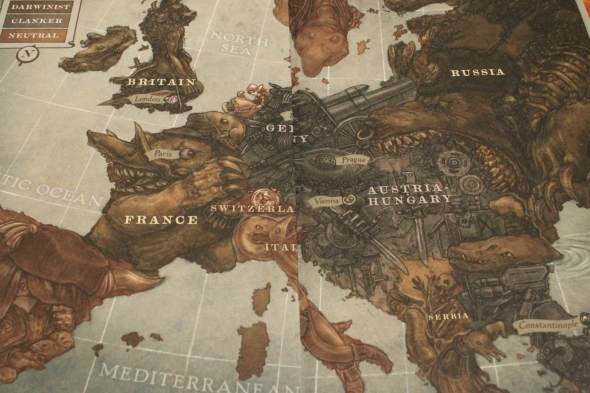 It is an alternative story of the World War I where the battle is between the Clunkers and the Darwinists. The Clunkers are the countries who uses machinery, guns, and metals, while the Darwinists are using genetically altered/mutated beasts as their vehicles and, uhm, animal-power. The Austrian-Hungarian Prince Aleksander’s parents were killed; his people and the Germans are hunting him and he has no choice but to run away and hide with only of his loyal crew of four men and this battleworn Stormwalker. Then there is this Deryn Sharp, a Scottish girl, who is pretending to be boy to join and be accepted in the British Air Force. In the long run of misadventures, he crossed path with Deryn Sharp in the ship called Leviathan and there they are to battle that will change their lives. 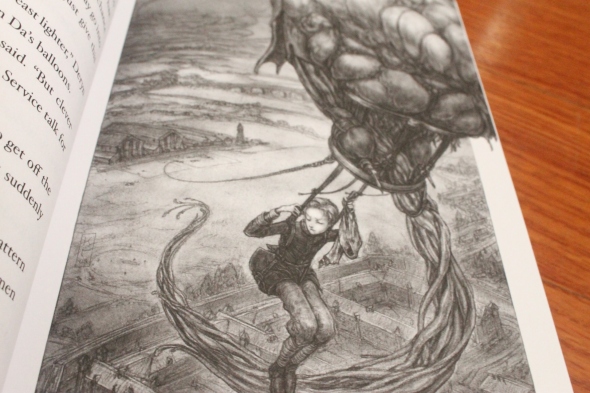 Leviathan was my first Steampunk book and it’s not really a bad one to start with. I like the book because of its interesting plot-line as well as the non-stop action of the war between the Clunkers and the Darwinist. I kind of expected the book to be boring and dragging because of its historical plot; there are, but the good exciting parts outweighed them. I enjoyed it but it isn’t exactly a remarkable one. It’s like something is lacking. I actually lost my interest at the end of the book! I didn’t feel the urge to read the second book, Behemoth, ASAP.

There are factors why: 1) I felt exhausted while reading it. It’s like the war was happening in my head; 2) Leviathan, as my mom told me, is a sea monster mentioned in the Bible. It is also believed one of the seven princes of Hell. Call me a religious nut, but I really lost my interest when my mother¹ pointed it out to me. Yes, the idea of using it is really creative and all but I don’t really buy it. The second book is also the same. 3) The thought of reading books with the titles related to demons kind of scares/freaks me out. 4) Deryn Sharp’s consistent use of the expression “barking spiders!” annoyed the hell out me. 5) The story is plot-driven and the characters aren’t exactly developed.

I think this will be a great one if adapted into a film, but please, not Michael Bay.

¹ Yep, my mother watches over my books and she’s kind of protective of what read. It’s all right. Nothing bad about it. She reads my books, too.
P.S. I’m selling my hardbound copies of Leviathan and Behemoth. E-mail me if interested!

02 Jul This entry was published on 02.07.12 at 11:44 am. It’s filed under In Which I Think About Random Things, In Which I Write About Books and tagged books, Fiction, Historical Fiction, Leviathan, Scott Westerfeld, Steampunk. Bookmark the permalink. Follow any comments here with the RSS feed for this post.

Older: F2F: Lord of the Rings by JRR Tolkien
Newer: “Dignity in Keeping With His Position”