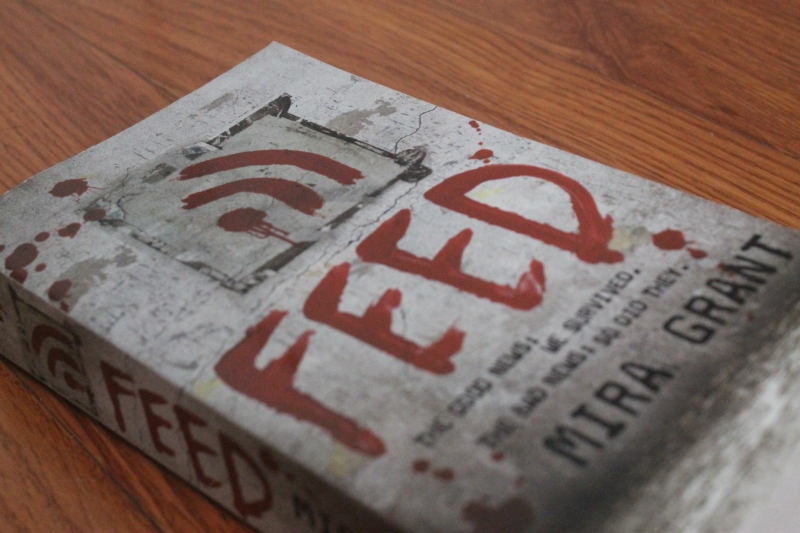 Last December, Tina gave me a copy of FEED by Mira Grant last Christmas because she doing a Tina—meaning, she’s giving away a copy of her favorite books to her friends. I’m blessed to receive this book since I’ve been eyeing this series, and YAY, finally got to read this last month.

I’m a fan of zombies—I love Zombieland, Shaun of the Dead, and The Walking Dead, but that’s in the movies/TV. What about the books? Nah. I haven’t got the chance to read books with Zombies so I can say that FEED is my first ever zombie book.

In the year of 2014, great scientists discovered a new way of curing cancer, as well as the common colds, but they never realized that the two organisms involved, when combined accidentally, will create an viral organism that spread so fast, taking one’s body and mind that no one could stop. Happenings were voiced out by different bloggers across the world, but the citizens didn’t believe it until they were the ones who experienced the virus—This is the Rising, it has begun. For twenty years, people are staying in their home, scared for their lives, scared for the truth. They never have the freedom to be outside without being bitten by the undead. Even in their own home, they are in fear. No one is safe nowadays. Even the authority are driving them to fear the undead—and they are taking advantage of it. Only a few people are voicing out the truth behind this madness, this include our modern day heroes—the bloggers. Georgia Mason and her brother Shaun has been blogging the truth for years, they even have their licenses to explore the restricted areas for human beings. They were given a chance to be on a campaign for the Presidential election under Senator Peter Ryman and this will be their biggest story in the history of their lives. They know the danger they’ll face along the way; the danger in exposing the truth about the undead. Sooner or later, it might kill them.

“The difference between the truth and a lie is that both of them can hurt, but only one will take the time to heal you afterward.”

This book is thick and long; the first few chapters is an information dump about blogging and the world of the undead. It’s quite unnerving since I am not at all interested with the ratings and shit about blogging—I’m just here to write and not to gain followers—but the information is handy for the next chapters. It made the next chapters go smoothly without me asking what the hell of blog-related conundrums they are talking about. It also made me at ease since all the killings in the book might shock or depress a person like me. Anyway, there are parts that can be boring and dragging to you, but for me, it is all right. I don’t like a book that is all zombies! I mean, they’re dead and they just walk like a drunkard and eat living human beings, what’s the excitement about it? I love how Mira Grant put a touch of politics in the book. Ah, the conspiracy! It perked up my mood for the whole week of being on a night shift. Politics is a one complex dirty part of a country and always have an effect to the citizens. It is already known that they have tendencies to deceive us, the citizens, and we are just here sitting and letting them doing what they can because they have the power over us. That’s why I hate you, Mira Grant. I hate you for voicing out how the truth matters, how the truth shall prevail (no, I am not advertising a newspaper here). It makes me realize that I am one of those citizens who are too afraid to speak out—let alone stepping out beyond the door. It bitch-slapped me how lame and stupid I am for being a quiet, non-cooperative citizen of our country. The message of this book is so strong that it makes me unleash the patriotic side of me (if I really have one), but still, I can’t remove from myself the fear of speaking out. This serves as a reminder for me, for all of us: we should rise up and voice out the truth.

“This is the truth: We are a nation accustomed to being afraid. If I’m being honest, not just with you but with myself, it’s not just the nation, and it’s not just something we’ve grown used to. It’s the world, and it’s an addiction. People crave fear. Fear justifies everything. Fear makes it okay to have surrendered freedom after freedom, until our every move is tracked and recorded in a dozen databases the average man will never have access to. Fear creates, defines, and shapes our world, and without it, most of us would have no idea what to do with ourselves. Our ancestors dreamed of a world without boundaries, while we dream new boundaries to put around our homes, our children, and ourselves. We limit our potential day after day in the name of a safety that we refuse to ever achieve. We took a world that was huge with possibility, and we made it as small as we could.”

Aside from that deep interest, it made me a lot paranoid lately because 1) during that week, I had cough and colds, meaning, I have the rhinovirus and what if it convert on its own and make me a zombie?! 2) Zombies were chasing me in my dreams; 3) whenever I hear moans, I jumped out of my seats, but it’s just one of my patients in pain; 4) I started bringing and spraying Lysol disinfectant spray every now and then, and 5) I abused the aseptic technique when I will be in contact with body fluids. Eeeek! These still have not died down, unfortunately.

“My father has always had just one piece of advice about zombies and ammunition, one he’s drilled into my head enough times that it’s managed to stick: When you have one bullet left and there’s no visible way out of the shit you’re standing in, save it for yourself. It’s better than the alternative.”

This book is awesome. Take time to pick this up and read. It will open your eyes in the things around you. RISE UP WHILE YOU CAN.

Update: Hey! The book is optioned for film rights! OMG.

10 Jun This entry was published on 10.06.12 at 10:38 am. It’s filed under In Which I Write About Books and tagged books, dysptopian, FEED, Georgia Mason, Mira Grant, post-apocalyptic, Shaun Mason, Zombies. Bookmark the permalink. Follow any comments here with the RSS feed for this post.