“The truth is the thing I invented so I could live.” ― Nicole Krauss, The History of Love 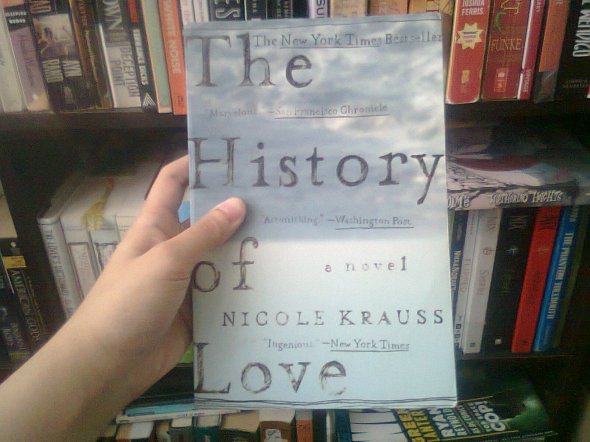 A book about a book.

I’ve been hearing good things about Nicole Krauss’ The History of Love and I’ve been meaning to read this, but I cannot, because it’s so hard to find a copy in any secondhand bookstores. Luckily, a friend of mine got me this when she saw it in a BookSale branch for P75 (less $2).

“When I got older I decided I wanted to be a real writer. I tried to write about real things. I wanted to describe the world, because to live in an undescribed world was too lonely.”

Honestly, I’ve been putting this post off because I can’t, for the life of me, to exactly write about the synopsis of the book. It tackles many stories and connections of the past to the present. I kind of find it complicated. Well, I can always try. There is this guy named Leopold Gursky, who wrote books for the person that he really cares for; her name is Alma. The book, The History of Love, is about his love for her; how he is not going to love any other woman other than Alma. Without confidence and self-esteem, Leo never thought this book will ever be published or even will live on through generations. It’s something that is read only by him. But of course, there’s a little part of him that wants it to be read by other people—especially Alma and his only son.

“Once upon a time there was a boy who loved a girl, and her laughter was a question he wanted to spend his whole life answering.”

The early part of the book told me the danger of being invisible. Seriously, it’s so sad. I felt heartbroken and teary-eyed for Leo Gursky. How unlucky can this guy get? He spent his life all by himself; no family, with only one friend—Bruno, and even disconnected from and rejected by the only woman he loves. He’s just waiting for death to come in the form of heart attack. He waits in crowded areas, in the train station, in the park, anywhere, as long as there are a lot of people. He doesn’t want to die alone (Well, yeah, nobody does) and he always wanted to be seen, exposed.

“I try to make a point of being seen. Sometimes when I’m out, I’ll buy a juice even when I’m not thirsty. If the store is crowded I’ll even go so far as dropping change all over the floor, nickels and dimes skidding in every direction. All I want is not to die on a day I went unseen.”

What a testimony Leo Gursky’s life was. He is one hell of a survivor. He survived the war. and the Holocaust. He survived love. He survived being lonely. He even survived a couple heart attacks. And yet, he is still alive. His lonely and melancholic voice sends tears to my eyes; I just want to go out and hug him.

“The moment had passed, the door between the lives we could have led and the lives we led had shut in our faces.”

In the parallel story, there’s this 15-year-old precocious child named Alma Singer. She is named after the leading character in her parents’ favorite book, The History of Love by some guy named Zvi Litvinoff. Devastated, sad, and struggling to cope with her father’s death due to cancer, Alma has been remembering her father—the memories they shared, his hobbies, etc. One day, a mysterious mail from a guy named Jacob Marcus asked her mother, a book translator, to translate a book that has importance to him, The History of Love. It sparked curiosity to Alma what does this guy do in life, if there are connections to her parents, etc. One by one, mysteries unravels. Stories and words makes them connected and alive.

“Loneliness: there is no organ that can take it all.”

This book is beautifully written, but a really, really sad one. I really love Leo Gursky’s voice; I sympathize with the feeling of loneliness he has. He made me feel the goodness of being alive and being with my family and friends. He made feel that somehow, I am really a lucky and blessed person. I love and I am loved.

On the other hand, Alma’s voice disconnected me to the book. I don’t know, I found the book really promising and engaging in the first part of the book, but it lost me when Alma was introduced. I mean, I admit that there are a lot of beautiful passages that I can quote every now and then, but there are times that I think that there are pages that are wasted; take for example Alma’s nonsensical lists. It doesn’t do anything to the story, but why Krauss included it? It’s obvious that Nicole Krauss is a really good writer, but I have a feeling that she can make this book greater than it is now.

12 Apr This entry was published on 12.04.12 at 12:52 am. It’s filed under In Which I Think About Random Things and tagged Alma Singer, book, Fiction, Leo Gursky, Leopold Gursky, literature, Nicole Krauss, The History of Love, writing, Zvi Litvinoff. Bookmark the permalink. Follow any comments here with the RSS feed for this post.

One thought on ““The truth is the thing I invented so I could live.” ― Nicole Krauss, The History of Love”