I WANNA HOLD YOUR HAND… 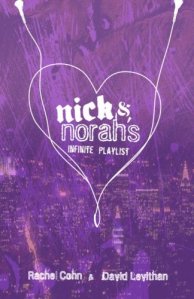 And I find myself saying, “It wasn’t really about her.” And finding it’s true.
“What do you mean?” Norah asks.
“It was about the feeling, you know? She caused it in me, but it wasn’t about her. It was about my reaction, what I wanted to feel and then convinced myself that I felt, because I wanted it that bad. That illusion. It was love because I created it as love.”

I just finished this book earlier this morning and man, I fell in love with this book. This book is written in a he-said, she-said type and it’s about this one endless night for two people bumped into each other to run away from their haunting past relationships. This guy Nick O’Leary, a straight-edge straight boy from Hoboken in an ‘all-gay’ /queercore band called the ‘Fuck-offs’ (Or the ‘Jerk-Offs’ in the movie) is heartbroken from his 6month relationship with his girlfriend,Tris and is still fucked up and stuck in making mixtapes and songs for her. He saw Tris one night during their gig at a bar and to escape Tris’ attention, he asked Norah Silverberg, a ‘frigid’ girl from Engelwood Cliffs that came with Tris in high school, to be his girlfriend in the next 5 minutes. One endless night in the world of mixtapes, of stripping nuns, hotel ice rooms,  ex-boyfriend and ex-girlfriends, holding hands (‘I Wanna Hold Your Hand’ by the Beatles) and writing songs and singing in the rain. It’s a night they’ll never forget.

I like this Nick O’Leary guy because his life is music and poems. Every moments has its dedicated song, and his taste in music is really good and wide. I am jealous of it because I have the passion for different music genres but due to my condition (Menierre’s Disease), I have to lessen listening to music (esp. when using earphones – they might aggravate the hearing loss) so it pains me to loose the opportunity to listen to music. And so little I know now about different bands.

I think I need to read this all over again. I just felt alive again when reading this because I’ve been so dead and uninspired about this so-called ‘love-life’ thing. Been bitter to all of the guys and yeah, self-pity because I’m very Norah-like person.

You mean I’m not easy”

She clarifies: “No, bitch, I mean you intimidate guys with a look or a comment before they can even decide if they want a chance with you. You’re so judgmental. Along with frigid.”

Well yeah, this book gave me inspiration and hope on finding this so-called right person and it inspires me to do a round of mix tapes/ playlists!

28 Nov This entry was published on 28.11.10 at 12:53 am. It’s filed under In Which I Think About Random Things and tagged David Levithan, Nick and Norah's Infinite Playlist, Nick and Norah's Infinite Playlist by Rachel Cohn and David Levithan, Nick O'Leary, Norah Silverberg, Rachel Cohn, The Fuck-offs, The Jerk-offs. Bookmark the permalink. Follow any comments here with the RSS feed for this post.

Older: Teaser Tuesday [Nov 23]
Newer: ‘Give me room to cast my eel spear, and let follow what may’ -Margarethe, Confessions of an Ugly Stepsister

One thought on “I WANNA HOLD YOUR HAND…”